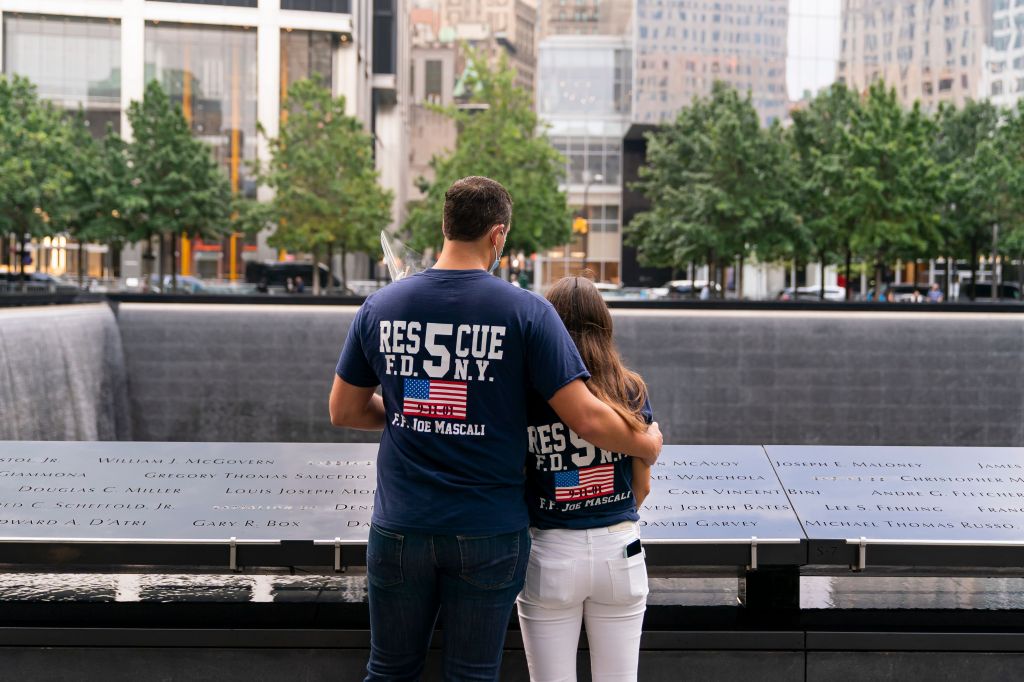 Editor’s note: One in a series of stories tied to the 20th anniversary of 9/11.

It seemed like a small thing, stopping for a yellow light. But it may have made all the difference for Jane Rosenthal on the morning of Sept. 11, 2001. Her car was a block and half away from the Twin Towers when the first plane hit. The CEO of Tribeca Enterprises was heading to work but managed to turn back and uptown. “I was wearing shoes that you couldn’t run in, heels. It’s the last time I have worn shoes and not carried sneakers with me. I’m always cognizant that you might need to run.”

There was no cell signal, recalled Jeff Sine, co-founder and partner of merchant bank Raine Group, who had just been recruited to head technology, media and telecom banking at UBS. He was at breakfast with a friend in midtown and when he walked outside, “The world had changed,” he said. He managed to connected with a colleague. Her husband was a police detective and Sine spent days with him and a few other cops on support runs – “driving around to places to pick up whatever the emergency workers needed,” from fresh fruit to ice to sweatpants.

He recalled the massive Chelsea Piers complex at 23rd Street and the Hudson River as a staging area for donations, full to bursting, and its ice ring turned makeshift morgue and triage area, grimly empty. That was one horror of the 9/11 attacks, there weren’t as many bodies or wounded to tend to as one would have thought – people either got out of the burning towers or in time or they didn’t.

Joe Amodei, CEO of Virgil Films, worked at USA Films then and was at the Toronto Film Festival like many in the indie community when the towers fell. He cried when he first saw the smoking hulks in lower Manhattan after finally managing to return to New York by train days later. USA embraced an idea to donate 100 movies and a new video recorder to every firehouse in every borough. The studios all cooperated. “On Nov. 11, we delivered to 162 firehouses,” he said. “The very last station was on 8th Ave. around 52nd. Normally, the firemen would gather around. This was different. The man that answered the door said, ‘We lost the entire house.’”

That month, Rosenthal and her partner Robert De Niro decided to plan a film festival to help the still smoky and acrid smelling neighborhood where everyone was shell-shocked and no one wanted to come. “It was really dark. You didn’t know what you were breathing,” she said. “Bob and I had talked about doing a film festival before… I called him and said, ‘We need to bring people back downtown.’ We announced it a week later.”

In the spring of 2001 she had worked producing About a Boy. “So I knew that for the first film, I could have About a Boy. I knew I had a film. I had no clue about [other] films, and activations, and [were] we a competitive festival. It was about bringing people back downtown. If I could bring 100,000 people, all would be right in the world. I was obsessed with it. Bob was obsessed with it. To bring everyone together, to give people a sense of hope, something to look forward to.”

She said would not have believed then if “you would have said to me that 20 years later I’d still be talking about our impact on our community, and having the bookends that we have had” with Covid.

What emerged from 9/11 is so complicated. The human toll, the financial toll, the destruction and rebirth of a swathe of the city. Families, and first responders who worked without masks or other protections, suffered lasting consequences. But Sept. 11 was geographically contained, the economic recovery relatively rapid and successful. Banks that had dominated the financial district made room for apartment buildings and cafes accelerating a transformation of the area to more residential and a hub for media, technology and the arts from Conde Nast to Spotify to the upcoming Ronald O. Perelman Performing Arts Center.

The boom was captured in a report from the New York State Comptroller, dated 2016 but still widely quoted, showing the population of lower Manhattan more than doubled from 22,700 in 2000 to 49,000 in 2014. The number of residential housing units also doubled as did the number of small businesses like dry cleaners. The financial sector accounted for more than half the jobs in the area in 2000, but fell to a third in 2015. Banks sent chunks of their business elsewhere, in part to create “redundancies” when it became a mandatory best-practice after 9/11 for all kids of organizations to have data centers in geographically dispersed locations.

The so-called War On Terror launched, with a milestone last month as U.S. troops finally left Afghanistan after 20 years. Airport security tightened with long lines, 3 oz. bottles, belt and shoe checks. There was a strong sense of national unity but also stereotyping of Arabs and Arab Americans and the rise of 9/11 conspiracy theories that today feel like an early echo of QAnon. (Spike Lee just excised a portion of the final chapter of his NYC Epicenters 9/11- 2021½ docuseries on HBO that features interviews with individuals and groups that believe the Twin Towers were brought down via a controlled explosion as part of a broader conspiracy.)

The imagery of 9/11, towers collapsing, dust-covered crowds fleeing, firefighters rushing in and up the towers, first responders toiling atop a monumental pile of rubble and twisted metal in heat and smoke, are stamped on the national psyche and still powerful — one difference from the current crisis. “There are some images that will become be emblematic of Covid, but they’re mostly emergency rooms and people on ventilators,” said Ed Arentz, a founder and co-president of Greenwich Entertainment. In 2001, he was a founding partner of newly formed film distributor, Empire Pictures, and programmer for the Cinema Village movie theater.

His office was on the 78th floor of the Empire State Building. “That became a huge deal, because it was seen as a potential secondary target, so the security getting in was quite elaborate and time consuming.”

“We stayed away for a little while, but virtual work was not as easy as it is today,” he said.

Cinema Village was open but attendance “non-existent.” (The New York Stock Exchange did close for four days, its longest shutdown since 1933. Broadway suspended performances for two days but played to largely empty houses for a time.)

“It was our first remote scenario,” said Tom Bernard, co-founder and co-president of Sony Pictures Entertainment. “The second was the Sony hack [a massive 2014 data leak by a group identifying itself as Guardians of Peace]. The third was Covid.”

Arentz and Bernard were also in Toronto on 9/11 but managed to finds cars and get home relatively quickly. Bernard said Canadian hockey gear he had in the back seat helped with guards in crossing the border.

The very ease of remote work now is fueling worries about NYC’s recovery. The population that had built up in lower Manhattan along with residents from across the city have scattered over the last 18 months. Luring them back is crucial. There the bustle, the tax revenue and the need to support a massive ecosystem of services and small businesses that depend on offices which have been slow to reopen — delayed most recently by a wave of the fast-spreading Delta Variant.

At one point over the summer, before Delta took hold, recovery seemed in reach. But Covid is a much longer slog than anyone imagined and the outcome for the city still uncertain.

“My hope is we are going to get through this as an industry. Things were opening back up,” said Amodei. However, “I don’t know if I feel the same way today [as I did then] that the city will ever be back to normal after Covid.”

“I am worried about New York,” Rosenthal said. But, more worrisome is that “what goes on in New York, and our political system and all of our major institutions that we believe in for our democracy, are being questioned in a lot of ways. I fear more for that than I do about the virus. The virus will be science and medicine.”