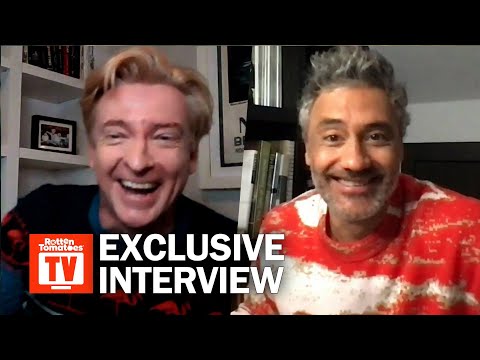 Reviews
Share on Facebook
Share on Twitter
Share on Pinterest
Share on LinkedIn
Rhys Darby, who plays ‘gentleman pirate’ Stede Bonnet in HBO Max comedy series ‘Our Flag Means Death,’ joined executive producers Taika Waititi (who also directed the pilot and plays Blackbeard in the show), series creator David Jenkins, and Garrett Basch, as well as Rotten Tomatoes editor Jacqueline Coley to talk about finding the funny in pirate tales and what works for them in high-seas fashion. Loosely based on the true adventures of the 18th century would-be pirate, the 10-episode season premieres March 3 with two episodes, continues with three episodes March 10 and two episodes on March 17, and concludes with two episodes on March 24.

► Learn more about this show on Rotten Tomatoes: https://www.rottentomatoes.com/tv/our_flag_means_death?cmp=RTTV_YouTube_Desc

Want to be notified of all the latest TV shows? Subscribe to the channel and click the bell icon to stay up to date.

US Air Date: March 3, 2022
Starring: Rhys Darby, Taika Waititi
Network: HBO Max
Synopsis: The unique new comedy is loosely based on the true adventures of 18th century would-be pirate, Stede Bonnet, played by Rhys Darby. After trading in his comfortable life for one of a buccaneer, Stede becomes captain of a pirate ship, but struggles to earn the respect of his potentially mutinous crew. Stede’s fortunes change after a fateful run-in with the infamous Captain Blackbeard, played by Taika Waititi.

Rotten Tomatoes TV delivers Fresh TV at a click! Subscribe now for the best trailers, clips, sneak peeks, and binge guides for shows you love and the upcoming series and TV movies that should be on your radar.