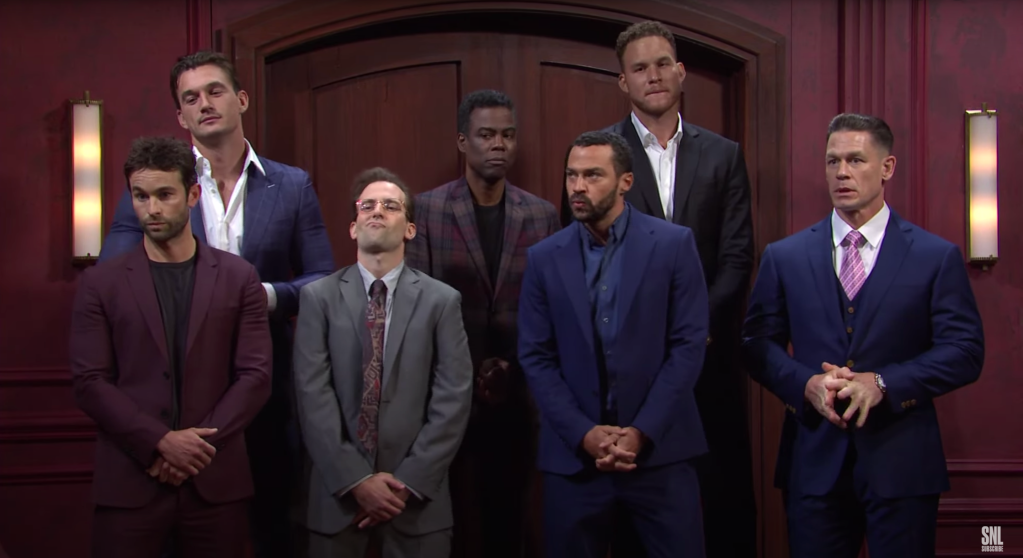 Kim Kardashian West showed off her social connections during her hosting stint on NBC’s Saturday Night Live, assembling an impressive roster of guest stars in the dating reality series parody skit The Dream Guy. A take on ABC’s The Bachelorette, it featured Kardashian as Rochelle, a single woman during a ritual resembling The Bachelor/The Bachelorette’s rose ceremony as she hands tokens to a group of bachelors.

However, the group is not your typical sketch characters portrayed by SNL cast members. One was them is, Zeke, played by the show’s Kyle Mooney, while all the others are celebrities playing themselves: comedian Chris Rock, actors John Cena, Chace Crawford and Jesse Williams, NBA star (and Kendall Jenner ex) Blake Griffin and, in another nod to The Bachelorette, former contestant Tyler Cameron.

Amy Schumer portrays a Dream Guy producer who becomes part of the love token ceremony. Kardashian’s Rochelle touts each of the contestants’ careers, with Crawford sneaking in a plug for his current series, The Boys, and Rock for fellow top stand-up comedian Dave Chappelle, who is currently embroiled in a controversy. (According to TMZ, Chappelle and Schumer were among comedians who helped Kardashian prepare for her hosting turn on SNL.)

Watch the skit above.